1.7 Million High Schoolers Vaped in 2016, As Both Vaping and Smoking Declined 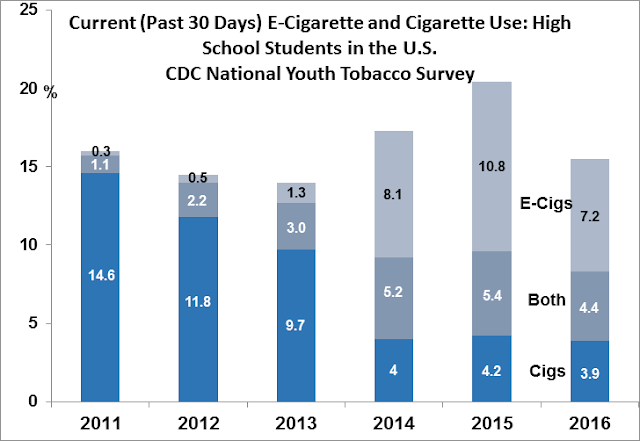 Compared with 2015, smoking declined by about 14% and vaping by 28%.
The apparent spike in e-cigarette use from 2013 to 2014 was partially due to what scientific researchers refer to as an artifact, as it stemmed from a change in the survey design.  Questions about e-cigarette use were bundled with those for other rarely used tobacco products until 2014, when they appeared in a separate section.

The NYTS also collected information on how many days e-cigarettes were used in the past month.  The chart below shows that 7 out of 10 students who vaped but did not smoke used e-cigarettes five days or fewer.  This is basically “party” or “weekend” vaping, rather than regular use.  While half of high school students who vaped and smoked used e-cigs five or fewer days, 22% used them all 30 days. 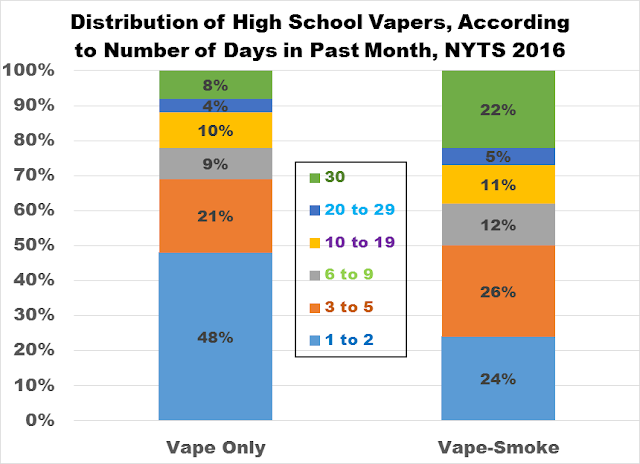 The federal data confirm that e-cigarette experimentation by youth since 2011 has not produced an epidemic of smoking.  In fact, the decline in youth smoking accelerated to a record low rate.
Original author: Brad Rodu
Tweet