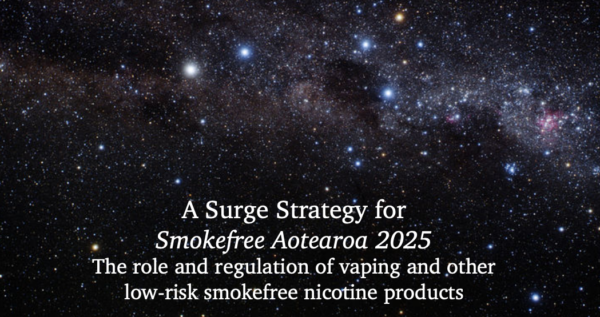 I have been pleased to collaborate with ASH (New Zealand) – Action for Smokefree 2025 – on a report on how vaping and other low-risk technologies could help get New Zealand back on track to meet its high profile target to have less than 5% smoking by 2025. The report is called: A Surge Strategy for Smokefree Aotearoa 2025.

…and these are all available here on the ASH Zealand web site.

Key features of wider interest include a focus on: (1) inequities (Māori smoking rates are over 30% and tax-driven policies add a further inequitable burden of harm to marginalised groups); (2) the concept of ‘risk-proportionate regulation’ as a framework to exploit the major opportunity while containing the relatively minor risks.

I include below the main report executive summary (more detailed than the two-page summary above):

In New Zealand, smoking is the leading cause of premature mortality for cancer, cardiovascular and respiratory disease. Smoking is also a leading contributor to ethnic and socioeconomic inequities in health and welfare, while imposing financial burdens on the poorest people. Progress in meeting the ambitious Smokefree Aotearoa 2025 goal to reduce adult smoking prevalence to below five percent by 2025 is now significantly off-track.

To get back on track, we advocate a surge strategy based on driving down smoking by facilitating smokers to switch to smokefree alternatives such as vaping products, heated tobacco and smokeless tobacco products. These smokefree alternatives present much lower health risks compared to cigarettes and with the right tax structure can ease financial pressures on smoking households, mitigating both health and economic inequities.

The concept of a public health surge is drawn from management of disasters and emergencies where a rapid increase in capability is essential to meet immediate demands. We argue that the concept can be applied to long-running chronic emergencies where a rapid change relative to business-as-usual is necessary – in this case to meet a target that will otherwise be missed.

We outline the proposed surge strategy in more detail below and expand in the body of this report.

If you want advice on vaping, visit the E-cigarette academy