Age Counts: Who Vapes (Tobacco/Nicotine) and Who Gets Lung Injuries 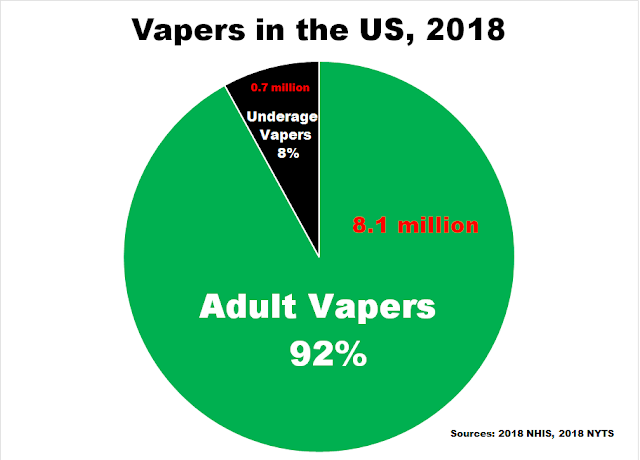 Federal officials, most notably at the Centers for Disease Control and Prevention, continue to be remarkably vague about the cause of 1,299 acute lung disease injuries and 26 deaths among people who have vaped.  This ambiguity, which I believe is out of sync with normal CDC investigations, has led to a media frenzy and partial or full bans on e-cigarette sales in many localities.  Major retailers are scrapping e-cigarettes while continuing to sell cigarettes, which have killed 368,000 smokers already this year. Making vastly safer cigarette substitutes unavailable to 8 million adult vapers will inevitably increase cigarette consumption, driving the death count even higher.
Officials have disclosed few details about the lung injuries and deaths.  On October 10, the CDC posted a report, once again highlighting “e-cigarettes, or vaping products” in the title while relegating critically important information about contaminated marijuana products to the fine print.
CDC’s data on 1,043 cases confirmed that the injuries are concentrated among younger age groups.  If nicotine vaping was the cause, the age distribution of lung injuries would be similar to the age distribution of vapers.  I used the tobacco questions in the 2018 National Health Interview Survey and in the 2018 National Youth Tobacco Survey to generate estimates of the number of current adult and underage vapers (here).  The table shows the distribution of lung injuries compared with the distribution of current (tobacco/nicotine) vapers.
.nobr br { display: none } td { text-align: center}
*Based on 1,043 patients https://www.cdc.gov/media/releases/2019/s-1010-vaping-injury-update.html
**Based on tobacco questions in the 2018 NHIS (18+ years, vaping every day or some days) and 2018 NYTS (< 18 years, vaping 20-30 days in past month)
The table reveals starkly different age distributions.  While 36% of lung injuries affected those under 20 years, that group constitutes only 19% of all current vapers.  Forty percent of the 8.8 million current vapers were over age 35, compared with only 20% of lung injury patients.
The table underscores another striking comparison.  The main rationale for punitive action against e-cigarette retailers is the so-called teen vaping epidemic, which I have discussed previously (here, hereand here).  But federal surveys show that underage teens make up only 8% of the 8.8 million current vapers, or about 736,000 individuals.  Of those, about 59% (430,000) are current cigarette and/or cigar users.
Here’s the tradeoff: 92% of current U.S. vapers are adults, most of whom are either current or former smokers (here).  Federal and state actions that prohibit vape products to “save the children” will predominantly and permanently injure their smoking parents and grandparents who are desperate to stop.
In summary, the age distribution of lung injury cases is considerably different than that of vapers, with injuries weighted toward the younger cohort.  This supports the emerging evidence that the outbreak is not related to commercial e-cigarettes and vape products, but rather to black market offerings.  Importantly, the misdirected campaign against the former threatens to disrupt availability to adult vapers, who desperately need them.
Original author: Brad Rodu

Like the Telephone Game, CDC's Lack of Clarity is ...
News Headline Shows How Misinformation About Respi...