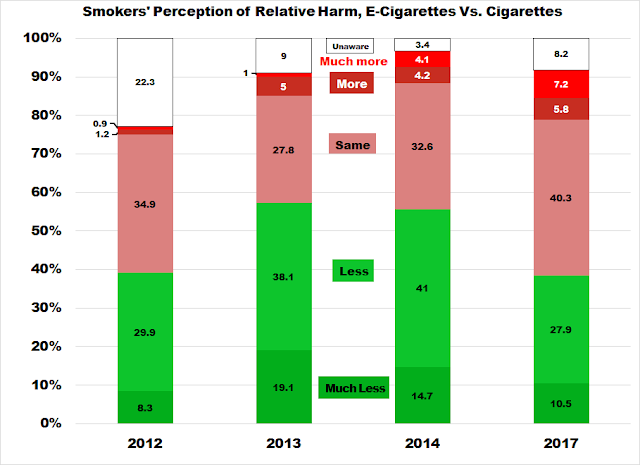 Clive Bates recently commented on Americans’ perception of the relative harm of e-cigarettes versus cigarettes, as measured by the National Cancer Institute’s Health Information National Trends Survey (HINTS).  After looking at numbers from 2013 and 2017 (available here), he asked:

“So what difference did four years of better products, academic studies, journal articles and commentaries, conferences and publicly funded risk communication make? Yes, it caused a deterioration in these already very bad numbers…those incorrectly believing e-cigs were just as harmful or worse than cigarettes had risen from 39.8% to 55.4%.”

These numbers, while unfortunate, pale in comparison to growing misperception among American smokers.  These are the people whose lives will be shortened if they don’t quit.  In the chart I summarize a disheartening trend.

In 2012, 38% of smokers correctly believed that vaping was safer than smoking (the green zone on the chart); the percentage increased to 57% a year later.  In contrast, about 37% and 34% of smokers thought e-cigs were equally or more harmful in those years (the red zone).

A slight decrease in accurate perceptions (green, at 55%) was seen in 2014, while those with misperceptions grew to 41% (red).  HINTS did not survey smokers again about the comparison until 2017; at that time, accuracy dropped to 38% (green), and misperception rose to 53% (red).

The sharp increase in misperceptions coincides with a sharp decline in smokers who vaped, from 6.3 million in 2014 to 4.1 million in 2016, according data from the CDC (here).

This is a national disgrace, driven by hundreds of millions of taxpayer dollars spent on anti-tobacco, anti-tobacco-harm-reduction research (here), with fawning complicity by the media and ill-advised endorsement by public health officials and major medical organizations.  Smokers are the unfortunate victims of this irresponsible crusade.