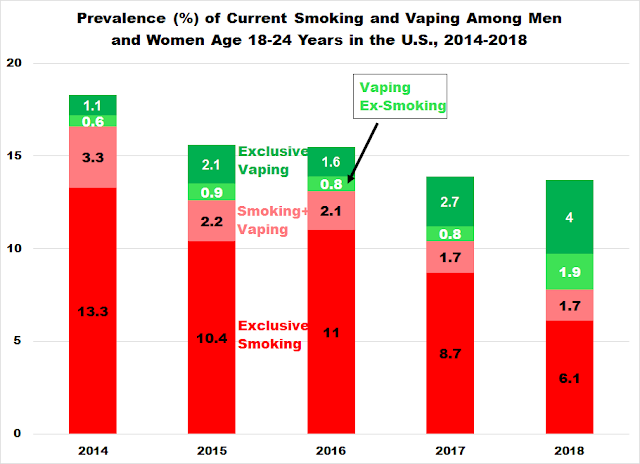 Federal officials have portrayed teen vaping as a pending disaster, creating a new generation of nicotine addicts heading for lifetimes of smoking and disease, culminating in early deaths.  The scenario is primarily based on a distorted and exaggerated interpretation of data in the National Youth Tobacco Survey.
One way to judge the validity of these teen vaping claims is to look at what’s happening among young adults 18-24 years old.  If the government claims are accurate, we should see the disaster starting to unfold in this group.
The chart at left, based on the CDC’s National Health Interview Survey, shows the prevalence of current smoking and vaping among young adults from 2014 to 2018.  Exclusive smoking is in red, dual use is in pink, and vaping is in green (with former smokers in lighter green).
The chart’s main message is seen in the sharp decline of red-pink.  Exclusive smoking prevalence dropped in half, from 13.3% to 6.1%, as did dual use.  Vaping increased, but only from 1.7% to 5.9%.  In fact, alluse went from 18.3% in 2014, all the way down to 10.1% in 2018 – an impressive decline.  The clear takeaway is that smoking is evaporating among young Americans.
Some in Congress are intent on addressing the so-called crisis, as seen by Representatives Frank Pallone (D-NJ) and Donna Shalala’s (D-FL) June 20 call for co-sponsors for H.R. 2339, the Reversing the Youth Tobacco Epidemic Act of 2019.  In reality, the “epidemic” is already in reverse.
Original author: Brad Rodu