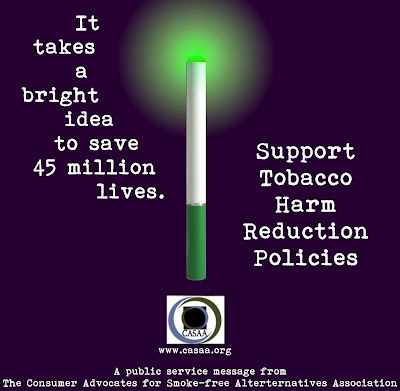 Although 69% of smokers say they want to quit, the fact remains that only 52% of them actually try and only 1% to 2% of smokers actually succeed at quitting for more than a year. That means that the 45 million Americans who continue to smoke every year need an alternative that has far less health risks than smoking. The alternatives have been quit or die - until now.

Electronic cigarettes were invented to serve as a safe alternative to traditional cigarettes - for those who cannot or will not quit smoking. They are meant to be a replacement for tobacco cigarettes, not a replacement for nicotine gums and patches. For these smokers, gums and patches are either not an option or simply don't work for them. The effectiveness of e-cigarettes is measured by how many people quit smoking conventional cigarettes, not how many people quit using nicotine.

Please support tobacco harm reduction policies! Share this blog post on social media, blogs and online communities or download our public service announcements from casaa.org to post on your own site. Help us get the message out!