CDC Data Shows That E-Cigarette Use Declined Again in 2017 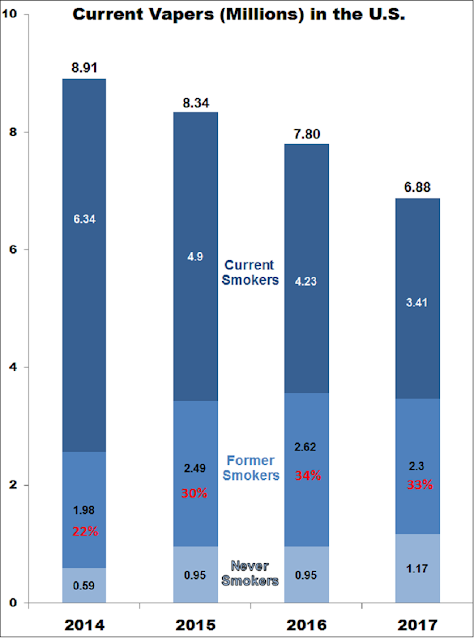 About 6.9 million Americans were current users of e-cigarettes in 2017, according to data in the 2017 National Health Interview Survey, the source for CDC national smoking estimates.  That’s a million fewer vapers than the prior year, and over two million fewer than in 2014, the first year NHIS surveyed for vaping.
The number of current vapers who were former smokers had increased through 2016, but dropped in 2017, from 2.62 to 2.3 million.  This is not good news for tobacco harm reduction.
Another fascinating detail from 2017 is that 1.17 million never smokers currently used e-cigs, and over two-thirds of those were 18-24 years old.  This may be an extension of the recent increase in high school vaping (here), but it’s important to note that smoking in this age group is way down (here).
Vaping has been portrayed as a menacing new epidemic by tobacco and nicotine prohibitionists in government and elsewhere.  It now appears that the misinformation in their anti-vaping messages has been effective (here).  The number of vapers has tragically declined.
Original author: Brad Rodu
Tweet