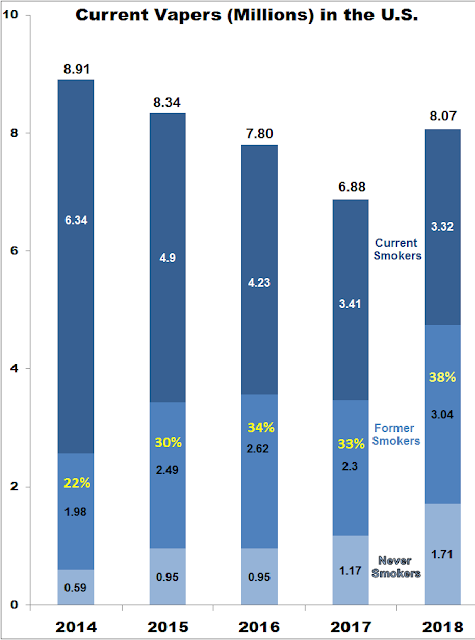 Before 2018 even ended (here), federal officials were obsessed with that year’s “teen vaping epidemic,” based on a distorted interpretation of data from the National Youth Tobacco Survey (here).  But what about adult smoking and vaping in 2018?  Our government has had the 2018 National Health Interview Survey (NHIS) data for months, but there has been no public release or discussion.  In all likelihood, the results don’t fit the government’s vision for a tobacco-free society.


There were about 8.07 million American adult vapers in 2018, up from 6.9 million the year before, according to just-released 2018 NHIS data.  That’s the first increase since the CDC started tracking e-cigarette use in 2014.


Thirty eight percent of current vapers – over 3 million -- were  were former smokers, also the highest number in five years.


Note that there were 1.71 million vapers in 2018 who were never smokers, and for the second year in a row, over two-thirds were 18-24 years old.  Importantly, this establishes the fact that increased rates of high school vaping (here) are resulting in lower prevalence of smoking among young adults.  In fact, the prevalence of current smoking was 7.8% in this group, which is way down compared to historical levels.  The vaping rate was almost the same (7.6%, with 1.7% currently using both products).


Tobacco and nicotine prohibitionists in government and elsewhere continue to portray vaping as dangerous and evil.  Despite this, more Americans are moving from cigarettes to this vastly safer smoke-free nicotine delivery system.