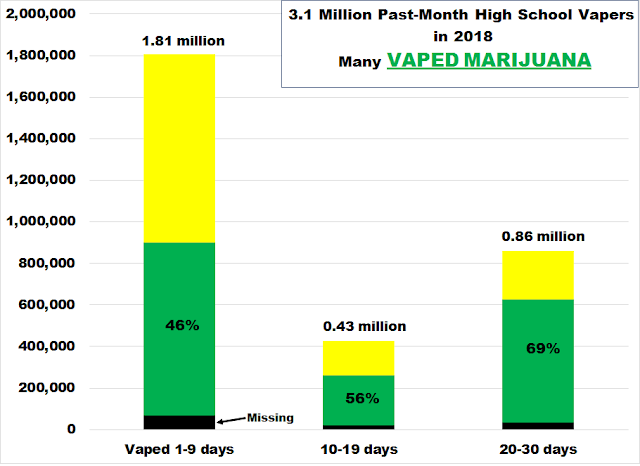 The Centers for Disease Control and Prevention finally acknowledged on September 27 that contaminated liquids containing tetrahydrocannabinol (THC) and cannabinoid (CBD) oils are the likely cause of the recent outbreak of lung injuries.  The agency said that “Most patients report a history of using THC-containing products. The latest national and regional findings suggest products containing THC play a role in the outbreak.” As of October 1, there were 1,080 cases and 18 deaths.
Unfortunately, the lung injuries and deaths have been conflated with the so-called teen vaping epidemic, which I have put into perspective in this blog (here, here, here and here).  Federal officials, however, continue to ignore one critical link: teen marijuana use.  Government surveys document that the prevalence of current (past 30 days) marijuana use has been high among high schoolers for 25 years.  The link is further demonstrated in the 2018 National Youth Tobacco Survey.  Although officials portray current high school vapers as caught up in a tobacco/nicotine epidemic, they rarely acknowledged that the students had vaped marijuana, as shown in the chart that I presented on September 25 at the Global Tobacco and Nicotine Forum in Washington, DC.  Of the 3.1 million high school vapers in 2018, over half had vaped marijuana.  The more teens vaped, the more likely they had used marijuana.  It is therefore not surprising that 16% of the lung injuries occurred in high schoolers.
Although the new CDC statement about THC is helpful, it over-emphasizes e-cigarettes, and it came weeks after state health authoritiesand the FDA implicated illicit liquids related to marijuana.  The CDC’s slow-walking and its continued conflation of e-cigarette use and nicotine vaping have had significant consequences.
First, officials have eroded the commitment of vapers who quit smoking, which may lead them to return to smoking.  Second, the CDC is discouraging current smokers from switching to e-cigarettes, even though such products have been used by millions of consumers nationwide for over a decade with no acute lung injuries.  Third, the CDC failed to warn consumers about using illicit THC liquids.  Earlier, more detailed warnings from the CDC might have save lives and limited injuries.
The vaping-related injuries and deaths are clearly tragic, but so are the deaths from smoking: nearly a half million annually for the past 30+ years, or more than 1,300 every single day.
Original author: Brad Rodu

Why is there anti-THR? (5) Needing an enemy and co...
Utah Department of Health Concludes that THC Vape ...