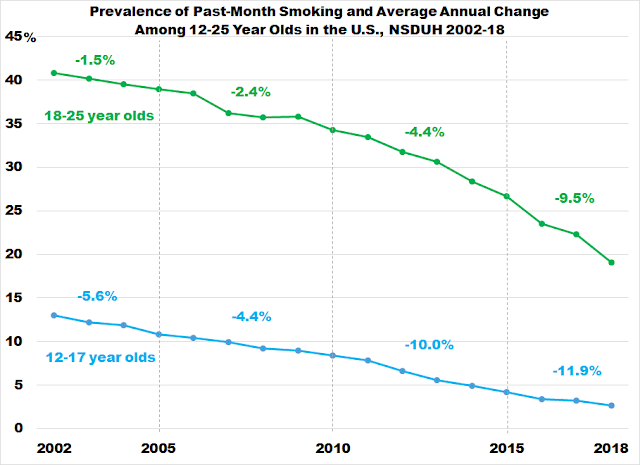 One month ago I used data from the federal National Health Interview Survey (or NHIS, which is administered by the Centers for Disease Control and Prevention) to illustrate that smoking among young adults (age 18-24 years) is evaporating.  In fact, the prevalence of current smoking in this group, defined in NHIS as every day or some days, was 7.8% in 2018.
The federal National Survey on Drug Use and Health (NSDUH) is another annual survey that measures smoking.  It is administered by the Substance Abuse and Mental Health Services Administration (SAMHSA).  Although the NSDUH collects information on smoking, in addition to alcohol and many other drugs, it does not use the every-day or some-day questions.  Instead, it asks about use in the past month.
Recently SAMHSA published a report on the NSDUH, which contained information about smoking in young adults (defined as 18-25 years) and teens (12-17 years) from 2002 to 2018.  I’ve illustrated those results in the chart at left.
First, note that the green and blue lines demonstrate considerable decline in both age groups across the entire period.  The lines start at least 8 years before e-cigarettes were used by anyone in the U.S.  More importantly, note the numbers above the lines indicating the average annual decline over the periods outlined by the faint vertical lines.  There is no question that the declines accelerated during the last two periods, when vaping occurred at so-called epidemic rates among teens and young adults.
It is remarkable that the prevalence of smoking among young adults in NSDUH is nearly the same as that in NHIS in 2018.  This is important, because NSDUH always has higher prevalence than NHIS, as I documented in previous research using these surveys.
Curiously, the NSDUH does not collect information on vaping.  However, the government officials who wrote the NSDUH report commented, “Some of this decline [in smoking] may reflect the use of electronic vaporizing devices (‘vaping’), such as e-cigarettes, as a substitute for delivering nicotine.”
A surprising and welcome admission from a federal source.  FDA and CDC: follow the data.
H/T to Jacob Sullum for writing about this story.
Original author: Brad Rodu