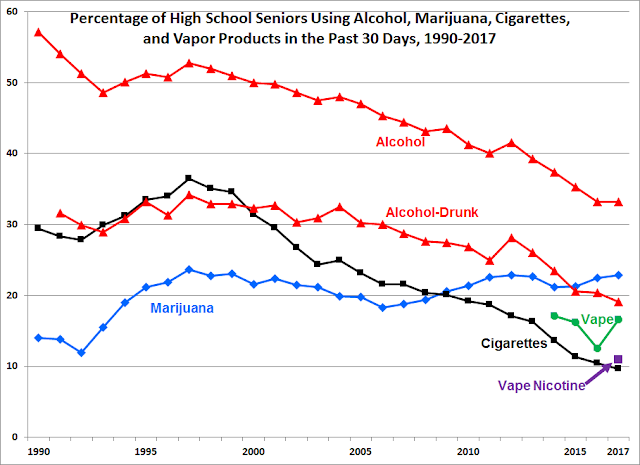 I noted in 2013 that the CDC director’s claim – that “many kids are starting out with e-cigarettes and then going on to smoke conventional cigarettes” – was pure gateway speculation (here).  Youth surveys had just started collecting information that teens were using e-cigarettes, but there was zero evidence that they were “going on to smoke.”

In January I presented data from the CDC’s National Youth Tobacco Survey showing that e-cigarette experimentation since 2011 did not produce an epidemic of teen smoking (here).  The 2017 Monitoring the Future survey, illustrated in the chart at left, provides further evidence of a steady decline in cigarette smoking among high school seniors.  In 2017, the smoking rate in MTF dropped below 10% for the first time in history.  At 9.7%, the rate is almost half that of 2011 (18.7%), while the vaping rate remained at 16-17%.  Meanwhile, high school seniors used alcohol and marijuana at far higher rates than cigarettes (33% and 23% respectively).  Nineteen percent of seniors reported being drunk in the past month.

Federal officials are still obsessed with the vape-to-smoke gateway, despite virtually no evidence.  FDA Commissioner Scott Gottlieb recently tweeted a warning: “The [e-cigarette] industry isn’t sustainable if it leads to a whole generation of youth initiation on tobacco.” (here)

Federal officials should stop claiming that vaping is a gateway to smoking, because evidence is absent in all federal surveys.