Finally, A Direct Comparison of Smoking and Smokeless Tobacco Use 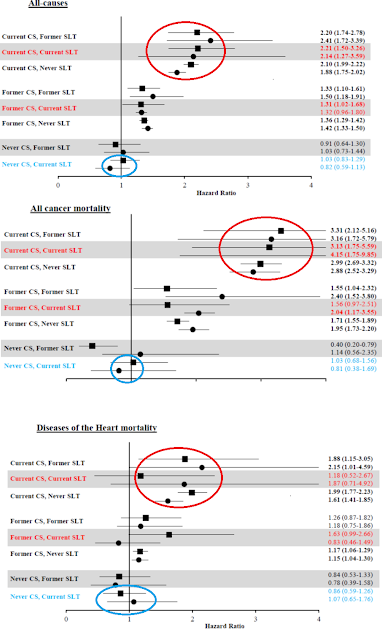 I have documented how American health authorities refuse to directly compare the health effects of smoking and smokeless tobacco (ST) use.  The results of such an exercise would require them to acknowledge the products’ vast risk differentials.  For years, the American Cancer Society has possessed data that would allow this comparison (here, here, and here), but they refused to run the analysis or provide me with the data (here). I recently explained how FDA officials hid the comparison in a New England Journal of Medicine article (here).
I have spent much of the past 25 years trying to correct this information deficit.  Lacking access to the necessary data, the only comparison I could make was indirect (here), which was less than ideal.
Now, at last, the data are in full view.  Altria scientists in April published the first-ever follow-up mortality study of cigarette smokers and ST users, using national surveys and the National Death Index, all of which are produced by the U.S. Government and publicly available.  The first author of the impressive study, published in Harm Reduction Journal, is Michael T. Fisher.
The figure at left illustrates the results for all causes of death, all cancers and heart diseases; smokeless tobacco is referenced as SLT.  In each section, hazard ratios – the likelihood of dying compared with never tobacco users – are illustrated for smokersby the first set of black dots/squares in the red circles; former smokers are in the next set; and ST users are in the third set, circled in blue.
Smokers are at more than twice the risk of dying from all causes than never tobacco users.  Former smokers’ odds are about 30% to 50% higher than those of never tobacco users (HR = 1.3 – 1.5).  Current ST users who never smoked died at the same rate as never tobacco users.
Compared with never users, smokers had even higher odds for dying from cancer, from 2.9 to about 4.2.  Former smokers also had higher odds, varying from 1.6 to 2.4.  Once again, ST users died at the same rate as never tobacco users.
Smoking isn’t as big a risk factor for diseases of the heart; other factors, like obesity, diet, physical fitness and diabetes, are also important.  Smokers in this study had odds ranging from 1.2 to 2.2, and not all of these were significant.  ST users had no excess risk.
In summary, this analysis of government data confirms that ST use is vastly safer than smoking.  The FDA and CDC not only had this data, but used it in other mortality studies of smokers and cigar users.  By not publishing the results on ST users, federal officials maintained the illusion that ST “is not a safe alternative to cigarettes.”  It is ironic that cigarette industry researchers produced this pivotal analysis.  Stay tuned to this blog for more results.
Original author: Brad Rodu