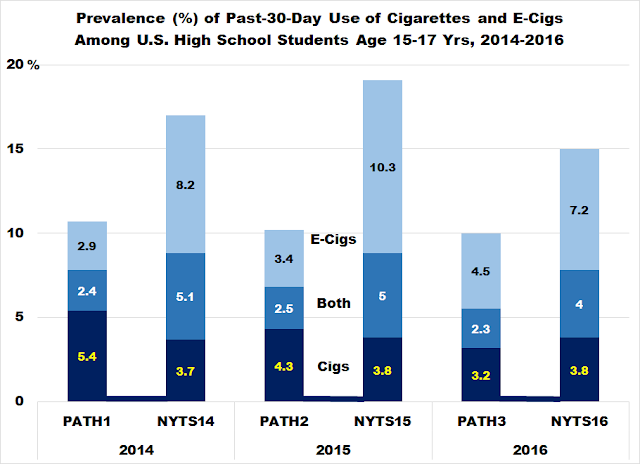 The federal government bases its assessment of a so-called teen vaping epidemic on data from the National Youth Tobacco Survey (NYTS).  Health officials typically advance the epidemic narrative by selectively releasing NYTS details before complete data sets are made available to external researchers.  This was the case with last week’s article in the Journal of the American Medical Association, in which it was reported that over four million high school students were current (past-30-day) users of e-cigarettes this year.  That’s 28%, up from 21% in 2018.  Unfortunately, we’ll have to wait until mid-2020 for access to all the underlying data; at that time, I will provide an analysis, much as I did for the 2018 survey hereand here.
Given that state and national tobacco policies are being driven by the NYTS, it’s fair to ask: How accurate is this survey?
I have had a long-term research interest in the differences in tobacco use data reported in federal surveys.  For example, I published a study 10 years ago comparing smoking rates in the National Health Interview Survey and the National Survey on Drug Use and Health.  I found that NSDUH’s 4.5% higher estimate in 2005 amounted to 9.1 million more smokers than the NHIS estimate.
NYTS is not immune to this problem.  Earlier this year I showed that its estimate of high school vapers was double that of the KnowledgePanel, another nationwide federal survey.
Now I provide further evidence that NYTS vaping rates may be hyperinflated.  I analyzed public use files from the Population Assessment of Tobacco and Health (PATH) study, which is sponsored by the FDA and considered an authoritative resource on tobacco use among American youth and adults.  I compared the first three waves of the PATH survey with the 2014, ’15 and ‘16 NYTS, using matching age groups (15-17 years).
The chart shows that PATH and NYTS have similar estimates of current smoking for all three years, but NYTS estimates of current e-cigarette use are much higher than those generated by PATH.  In fact, current e-cigarette use in NYTS was almost double that in PATH for all three years.
There is no way to determine which federal survey more accurately reports high school vaping rates.  But NYTS vaping prevalence estimates were twice as high as PATH and KnowledgePanel, in four separate years.  What is clear is that students participating in the NYTS are different from those participating in the other surveys.
Despite these critical issues, federal health officials and their allies rely solely on the NYTS to argue for the existence of a teen vaping epidemic.  This is unacceptable.  While the FDA recently praisedthe PATH study -- “The data from the PATH Study gives us critical insights into adult and youth tobacco use of flavored tobacco products…” – federal officials never cite PATH when they discuss youth vaping prevalence.  The FDA has actually supplied the reason for this contradiction, advisingthat “…estimates of youth tobacco use from the household-based PATH Study were generally lower than those from school-based national surveys such as the NYTS and Monitoring the Future…”  The government intentionally uses the highest numbers to make its case.
No one doubts that American youth are using e-cigarettes, but teen vaping is mischaracterized as an epidemic by federal public health officials, politicians and tobacco prohibitionists.  The drastic measures they champion will make harm-reduction products less accessible to millions of current and former smokers.  Public health would be better served with the British approach including accurate use assessments and the promotion of a full range of cigarette substitutes. 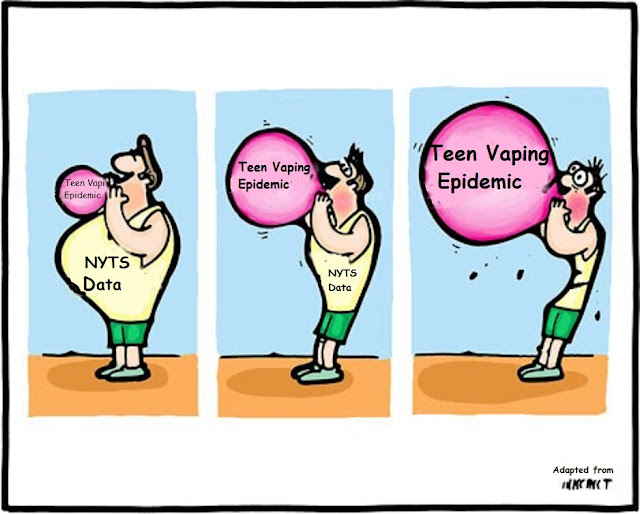