How Big Is the So-Called Teen Vaping Epidemic? 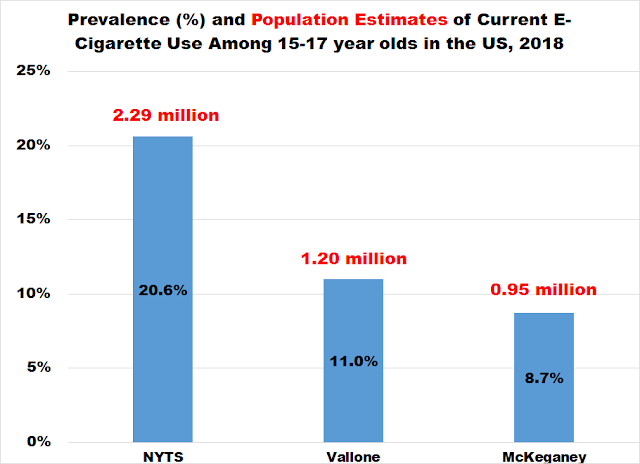 Federal authorities insist upon the existence of a teen vaping epidemic, based on results of the 2018 National Youth Tobacco Survey (NYTS).  They claim that current (past-30-day) use of e-cigarettes surged 78% in 2018, resulting in over three million high school vapers.
Federal officials ignore two other 2018 estimates from a commercial online panel that are representative of the U.S. population.   It’s called KnowledgePanel, and it’s a product of the German firm GfK (Growth from Knowledge).  While both of these published studies focus on JUUL use, I will examine only their e-cigarette estimates.
The first KnowledgePanel survey was analyzed by Donna Vallone and colleagues at the Truth Initiative, a rabidly anti-tobacco non-profit organization.  I have previously detailed major technical problems with their Juul results, and noted that the authors refused to respond to my questions in a professional forum.  However, it is unlikely that Dr. Vallone underestimated the prevalence of current e-cigarette use, which she reported as 11% among 15-17 year-olds in 2018.
The second KnowledgePanel survey was analyzed by Neil McKeganey and Christopher Russell at the Centre for Substance Use Research in the U.K.  Under contract with JUUL Labs to research the population impact of e-cigarettes, they recently published a study in the American Journal of Health Behavior reporting that current vaping among 15-17 year-olds in the U.S. was 8.7% in 2018.
The chart above presents the prevalence and population estimates from these three surveys.  In summary, the epidemic of vaping among 15-17 year-olds in 2018 involved either 2.3 million, 1.2 million or 952,000 youths.
Federal officials, politicians and tobacco prohibitionists are calling for drastic measures to curtail a teen vaping epidemic.  Their first priority should be to produce accurate estimates justifying both the existence of such an epidemic and any remedial program.
Original author: Brad Rodu