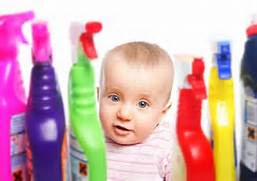 The journal Pediatricsrecently reported that “there were more than 8,200 calls to US poison centers regarding exposures to liquid nicotine and e-cigarettes among children younger than 6 years of age from January 2012 through April 2017, averaging 129 calls each month or more than 4 a day.” (here) As I previously noted (here), annual exposures (which were 1,548 according to the Pediatrics article) should be considered in appropriate perspective.
While the journal article acknowledged that e-cigarette exposures “decreased by about 20% from 2015 to 2016,” its senior author called for additional regulation.  If children’s exposure to products should guide regulatory priorities, the following chart from the American Association of Poison Control Centers (2016 report available here) may be instructive.
.nobr br { display: none } td { text-align: center}
* All Ages
Of the half million exposures among children under 6 years of age recorded by poison control centers in 2016, 45.8% involved cosmetics, personal care products or household cleaners, while e-cigarettes accounted for just 0.4%.
Looking at product-related deaths per 100,000 exposures, rates were highest for fumes and vapors (which included carbon monoxide) and for alcohols, but there were no deaths recorded for tobacco exposures, including e-cigarettes.
Public health generally and children’s health in particular may benefit from regulatory reform that is keyed to demonstrated risk exposure.