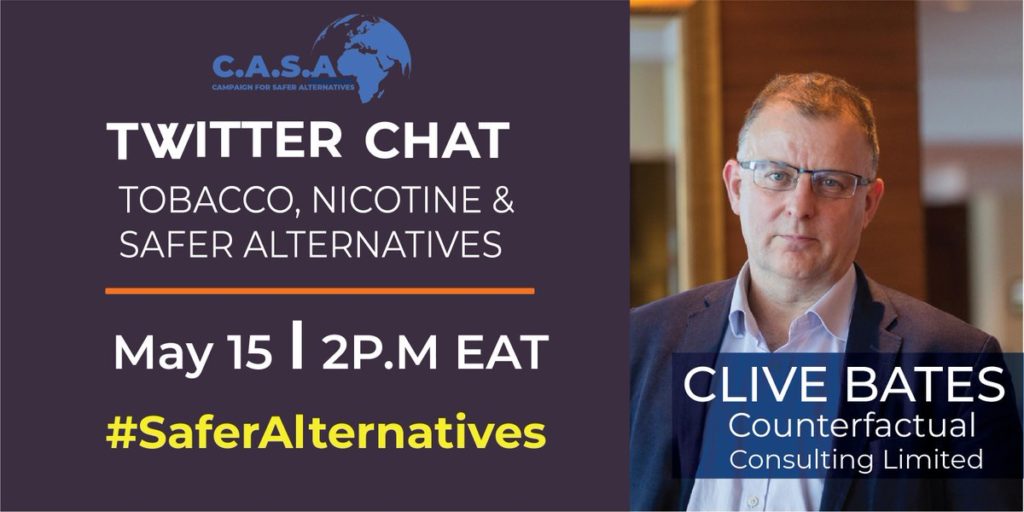 I’ve just taken part in a Twitter chat on tobacco harm reduction with an Africa focus. The chat was organised by the Campaign for Safer Alternatives (@GoingSmokefree) with hashtag #SaferAlternatives. I thought it would be good to preserve it in one place and invite more comments and questions. You can access the tweets from here to comment, and please use the hashtag and tag me if you would like a response. Disagreement and debate welcome! Trolls, not so much.

What is the cause of harm?The role of nicotine in sustaining smoking and quittingWhat is the concept of tobacco harm reduction?Does it work and where does fit with the FCTC?What about all the controversy and anger?What effect does anti-vaping activism have?What policies would help in Africa?What about countries that ban e-cigarettes?What is the impact of vaping on youth?Do people have a reasonable understanding of risk?What about the tobacco industry?And tobacco farming?Will this bring on the ‘endgame’ for smoking?

And a discussion about whether nicotine itself is harmful…

And a couple of good pushbacks on this one – thanks for putting me straight!

And a thread from Carl V Phillips on the question of causing or promoting tumour growth.

2. The role of nicotine in sustaining smoking and in quitting

Nicotine is the main reason people smoke, but it is also part of the means of stopping smoking. With NRT we use nicotine to help people quit… vaping takes that several stages further.

3. What is the concept of tobacco harm reduction?

Changing the nature of a behaviour to reduce, though not necessarily eliminate, the harm that arises from continuing with the behaviour.

4. Does it work and where does fit with the Framework Convention on Tobacco Control?

Yes, very much part of the FCTC and already having significant impacts around the world.

Though tobacco harm reduction is mentioned explicitly and should be part of the FCTC implementation, the WHO and FCTC convention secretariat have often been hostile to the concept. We have responded with an evidence based case:

5. What about all the controversy and anger?

Tobacco harm reduction does seem to cause a lot of division and rancour, but it shouldn’t – it’s a perfectly reasonable public health strategy.

6. What effect does anti-vaping activism have?

7. What policies would help in Africa?

I think the basic MPOWER ideas that are embodies in the FCTC are the right approach, but with the addition of tobacco harm reduction to widen the range of response options. We need to encourage people to quit smoking, above all – and use any method that works for them.

8. What about countries that ban e-cigarettes?

See my various letters to the Hong Kong administration on vaping prohibition: Letter March 2019 this follows submissions in August 2018,  June 2018 and June 2015. Also, see sustained criticism of the absurd situation in Australia: Challenging the prohibitionists.

9. What is the impact of vaping on youth?

10. Do people have a reasonable understanding of risk?

11. What about the tobacco industry?

For further views on the tobacco industry, I have a few posts:

I did visit some tobacco farms in in Zimbabwe while living in that beautiful country between 2014 and 2018. It was fascinating to see how it worked. Yields varied from 400kg/ha to 4000 kg/ha and price from $1/kg to $6kg. There’s a lot of gain to be made within those ranges.

PS. they don’t usually have starving children – unless there is a disaster or war etc.

13. Will this bring on the ‘endgame’ for smoking?

Is this an extension of the tobacco market or a fundamental shift in technology? I believe it is fundamental.

If you want advice on vaping, visit the E-cigarette academy

The 2018 American Teen Vaping Epidemic, Recalculat...
About Sensationalist Science and Rhetoric on E-Cig...