Slight Teen Vaping Increase and A Continued Smoking Decline in 2017 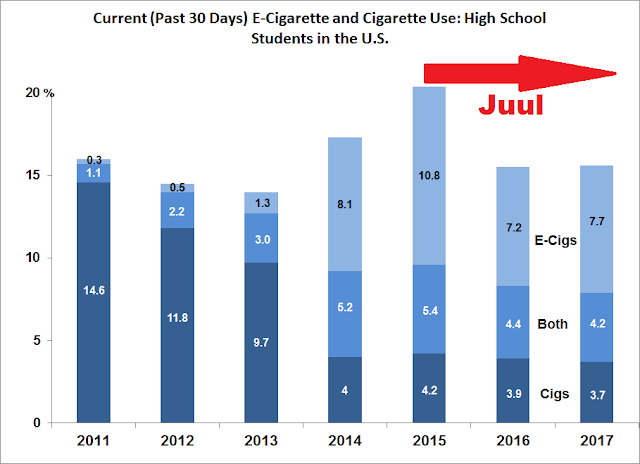 Despite the rhetoric, there is no “Juul epidemic” among high school students.
The purported epidemic has been widely cited in the media.  Just last week, an article in the New England Journal of Medicine (here) asserted that “use of these products is rampant among young people.”  The authors based their claim on “Media stories about Juul … [that] highlight anecdotal reports from students, parents, teachers, and school superintendents.”  This falls far short of normal journal standards.  (The NEJM commentary also included the confounding contentions that “Pod mods are easy to conceal from authority figures” and “Juul vaporizers measure 93.98 cm,” or an astounding 37 inches.)
Campaign for Tobacco-Free Kids president Matt Myers has been a cheerleader for the mythical epidemic: “Everyone was asleep at the switch.  And by the time we woke up, we had an epidemic on our hands.  I've never seen a tobacco-related product spread across this country as fast among young people as this product.” (here)
In fact, no one else has seen it.  Claims of a Juul epidemic are baseless.  Government data show that while e-cigarette experimentation increased among American high school students from 2011 to 2015, the year Juul was introduced, vaping stabilized in 2015 and smoking rates continued to drop.
In 2017, 1.15 million (7.7%) American high school students were current (past 30 days) e-cigarette users, 556,000 (3.7%) smoked, and 632,000 (4.2%) used both products, according to the Centers for Disease Control and Prevention’s 2017 National Youth Tobacco Survey (NYTS).
Comparing those numbers to 2016 (here), smoking and dual use declined marginally, by about 0.2 percentage point, while vaping increased by 0.5 point.
While Juul sales may have surged, neither they nor any other e-cigarette brand produced a youth vaping epidemic.
*The apparent spike in e-cigarette use increased among high school students from 2013 to 2014 was partially due to what researchers term an artifact, related to a change in the survey design.  Questions about e-cigarette use were bundled with those for “other” tobacco products until 2014, when they appeared in a separate section, after cigarettes, cigars and smokeless tobacco.
Original author: Brad Rodu
Tweet

Let’s try to get our criticisms right, shall we? (...
Dual use and the arithmetic of combining relative ...