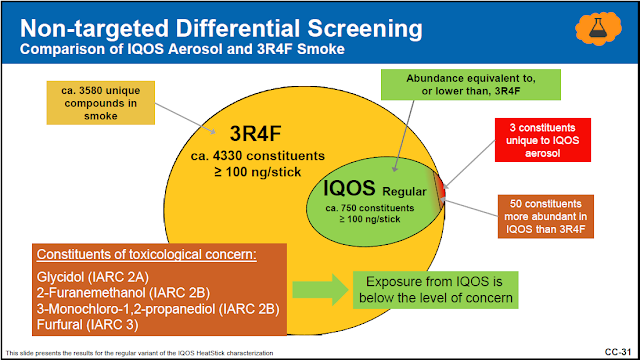 Recently a special issue of the journal Tobacco Control offered 22 articles on Philip Morris International’s (PMI) IQOS heat-not-burn tobacco product (here), aiming to dissuade the FDA from allowing IQOS sales as reduced risk products for smokers.  In the words of editor Stanton Glantz: “Policy makers should give greater weight to the advice provided by public health scientists than to submissions from industry when it comes to regulating tobacco products such as heated tobacco products.”

Dr. Glantz’s advice has been inaccurate in the past. A year ago, when he argued that “PMI’s own data fails to support a modified risk claim in people who are actually using [IQOS],”  I detailed the errors in his analysis (here).  This new collection of anti-IQOS articles deserves the same scrutiny.

One treatise, by UCSF’s Gideon St. Helen and colleagues, acknowledges that “All substances in PMI’s list of 58 constituents (PMI-58) were lower in IQOS emissions compared with mainstream smoke of reference cigarettes.”  That accurate statement is followed by the suggestion that PMI ignored that “levels of 56 other constituents, which are not included in the PMI-58 list or FDA’s list of [harmful and potentially harmful constituents], were higher in IQOS emissions.”  The authors criticize PMI for not undertaking “non-targeted chemical analysis” to identify these compounds.

Dr. St. Helen et al. are mistaken.  The chart above, taken from PMI’s presentation to the FDA advisory committee last January (here), documents that the company performed that analysis.  PMI’s extensive investigation of “other” substances is confirmed on the FDA website, where a chart labeled “non-targeted screening” appears in a document submitted by PMI on December 8, 2017, and published by FDA on January 12, 2018 (here).

The December filing acknowledged that “80 compounds were found to be of higher concentration or new in [IQOS] aerosols…compared to cigarette smoke.  A toxicological assessment was performed and identified 68 of those that do not present specific toxicological concern. 8 compounds present potential genotoxic concerns based on structure-activity computational alerts and 4 compounds are classified mutagens/carcinogens.”

PMI scientists did not dismiss the findings: “Although a minor subset of compounds identified in this study show intrinsic (potential) toxicological hazards, overall toxicity of the THS generated aerosol was lower compared to cigarette [smoke]. In vitro studies demonstrated a marked decreased biological activity of [IQOS] aerosol compared to smoke. An in vivo 90 days inhalation study showed in general a lower biological activity of the mainstream aerosol from [IQOS] when compared to mainstream smoke.”

Importantly, PMI is undertaking more research: “Additional investigations are ongoing to further characterize the impact of the [mutagens/carcinogens] on the overall toxicity of [IQOS] products.”
Original author: Brad Rodu
Tweet

FDA to Announce Ban on Sale of Most Cigarettes in ...
Truth Initiative Stumbles in JUUL Study