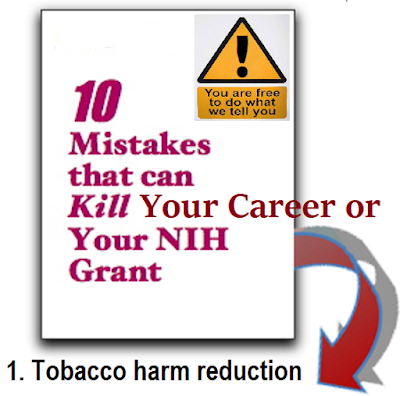 The influential journal Sciencerecently posted on its website an article (here) on the Foundation for a Smoke-Free World, an organization funded by a pledge of almost $1 billion from Philip Morris International.  The Foundation supports tobacco harm reduction research with a stated goal of “end[ing] the production and use of combustible cigarettes and help[ing] smokers switch to less dangerous alternatives.”  Asking, should scientists take the funding, the article clearly leans toward “no”.
The only affirmative comments included in the piece are from the Foundation’s director and me, with my response truncated by the author to this: “But public funding to help settle those questions is in short supply, says Brad Rodu, a harm reduction advocate at the University of Louisville in Kentucky who for years has relied on tobacco money.”
As I have written, government funding, predominantly from the National Institutes of Health, keeps academic research aligned with a vision of a tobacco-free society (here).  NIH’s opposition to tobacco harm reduction dates back to the mid-1990s, as seen in the agency’s efforts to undermine my research and reputation (detailed in Jacob Sullum’s book, For Your Own Good, here).
The Science writer casts me as “a harm reduction advocate…who for years has relied on tobacco money,” despite my record of 65 published professional articles (available here, with PubMed links) and 24 years of scientific endeavor, 19 of which were supported by unrestricted grants from tobacco companies to, and administered by, two universities.
Elsewhere in the story, an individual with half as many published articles is respectfully described as a “tobacco control researcher” as he terms the Foundation a “scam”.
I support academic freedom, including the right to use research funding from any lawful source, accompanied by total transparency and full disclosure.  Research ought to be judged on its merits, using objective standards of quality and accuracy.
The Foundation director is, regrettably, prescient in anticipating “harassment of grantees and staff” and “ad hominem attacks”.  Such behavior is, as he notes, unacceptable.
Original author: Brad Rodu
Tweet