Tobacco Sales to Kids Is a Problem For States, Not Retailers 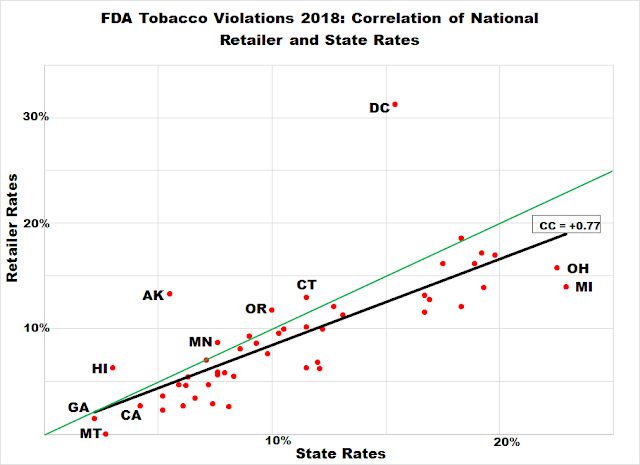 FDA Commissioner Scott Gottlieb recently threatened that “some flavored e-cigarette products will no longer be sold at all…other flavored e-cigarette products that continue to be sold will be sold only in a manner that prevents youth access…” (here)
Dr. Gottlieb blames the so-called youth vaping “epidemic” on illegal retail sales and “kid-friendly marketing.” (here)  Focusing so heavily on retailers, he ignores the fact that underage sales rates are extremely low in many states – Georgia (2.2%), Montana (2.7%), Hawaii (3.0%) and California (4.2%) for example, according to 2018 FDA inspection data – while violation rates in others is extremely high -- North Dakota, Michigan, Ohio and Nevada are close to 23% (here).
In order to explore the connection between retailers’ violations and state enforcement efforts, I downloaded FDA information on 26,000 inspections conducted in 2018 at national retail chain stores – Walgreens, Walmart, Rite Aid, Shell, Family Dollar, Dollar General, Circle K and 7-Eleven.  I calculated the rate of violations for these chains’ stores in each state (excluding Nevada and North Dakota, with very low numbers of inspections).
The chart shows the combined results for these retailers.  Note that the x axis is the state rate, based on 146,000 inspections, and the y axis is the retailers’ rate, based on 26,000 inspections.  There is a strong correlation between violations in these chain stores and the state in which they were located (correlation coefficient, CC = +0.77).  The correlation is also seen with individual companies.  For example, Walgreens’ violation rate was 2.2% in Georgia (based on 46 inspections) and 17% in Ohio (with 229 inspections).
Note that nearly all of the retailers’ rates are below the green diagonal line, showing that they were lower than the state rates in all jurisdictions except DC, Connecticut, Oregon, Minnesota, Alaska and Hawaii.
The FDA blames retailers for selling tobacco products to children, but it ignores the significant differences in violation rates among states.  Youths in Georgia, Montana, Hawaii and California can seldom buy tobacco products, suggesting that those states’ enforcement efforts are far more effective than the other 46 states. The simplest route to obtaining age restriction compliance seems to be FDA pressure for stronger state enforcement, rather than agency action against retailers or product categories.
Original author: Brad Rodu

Public Misunderstanding of Health Risks is "a Good...
San Francisco is the stupidest place in the world ...