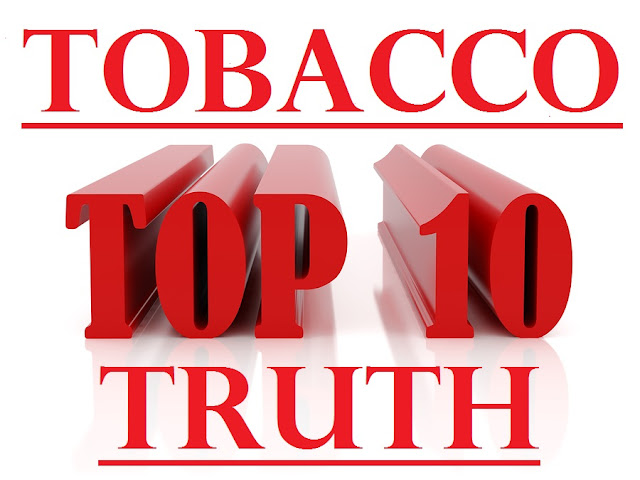 During the holidays we celebrate this blog’s eight years of factual reporting and critical analysis of science and policy surrounding tobacco and tobacco harm reduction.  We’ve strived to satisfy the curiosity and technical interests of health professionals, while couching our message in terms that are comprehensible to the lay consumer as well.  We are proud to note that Tobacco Truth has some 450 posts, with over 2.8 million pageviews.  We sincerely hope this translates into a significant number of lives extended and improved.
Based on pageviews, here are the Top Ten Tobacco Truths, with notable quotes from each.
I’m a Smokeless Tobacco User – Will I Get Mouth Cancer?  2012  “Harm reduction doesn’t allow us to enjoy risk-free lives. It does give us valuable information to manage the risks of the activities that make life enjoyable.”
Nicotine Levels in American Smokeless Tobacco Products  2012  “The broad range of free nicotine levels among these products is good news for smokers.  They should look for a smokeless substitute that satisfies them.”
The Proven Positive Effects of Nicotine and Tobacco  2010  “It’s time to be honest with the 50 million Americans, and hundreds of millions around the world, who use tobacco. The benefits they get from tobacco are very real, not imaginary or just the periodic elimination of withdrawal. It’s time to abandon the myth that tobacco is devoid of benefits, and to focus on how we can help smokers continue to derive those benefits with a safer delivery system.”
Tobacco Trick or Treat by Florida’s Surgeon General  2012  “The availability of flavored tobacco products is important for tobacco harm reduction among adults who smoke…it is important that these individuals have access to appealing, vastly safer smoke-free alternatives to cigarettes…Banning tobacco flavoring is no more logical than banning flavored beer, wine and mixed drinks on the grounds that those products appeal to youth.”
More Evidence That Smokeless Tobacco Products in the U.S. Have Low TSNA Levels  2012  “this study shows that TSNAs are present in tiny concentrations.  As discussed in a previous post (here), there is virtually no evidence that current TSNA levels are associated with any measurable cancer risks.”
Nebraska Legislature Passes Tobacco Harm Reduction Resolution  2012  “The Nebraska legislature on March 27 [2012] passed resolution LR 499 to ‘recognize the importance of tobacco harm reduction strategies as an additional choice to assist cigarette smokers in quitting.’ ”
The Health Risks of Cigar Smoking  2012  “Cigars, the data show, have few health effects when used in moderation.”  Also see this popular post in 2016.
Regulatory Purgatory: Tobacco Harm Reduction at Risk  2012  “The FDA should abandon regulatory fundamentalism that condemns safer product development to a purgatory of red tape.”
Cancer Risks From Smokeless Tobacco Use: Next To Nil  2009  “The clear implication is that the deaths each year of 103,635 male smokers in the U.S. could be avoided if public health leaders shared the truth about safer smokeless tobacco, and if tobacco manufacturers were allowed and encouraged to urge smokers to switch.”
E-Cigarettes – No Toxic Effects from Inhaled Propylene Glycol Aerosol  2011  “First, even high concentrations of PG vapor don’t have any measurable harmful effects, which is fully consistent with its designation by the FDA as “generally recognized as safe” as a food additive for all food categories up to 2% (here). Just as important, there will be no impact on bystanders from “second-hand” exposure to e-cigarette vapor, if it occurs at all.”
The following posts from the past year have been very popular as well.
E-Cigarette Toxic Chemical Exposure Is Same as for Nonsmokers  “The fact that vapers’ [volatile organic compound] exposures are similar to those of nonsmokers is headline-worthy.”
Federal Studies: ZERO Mouth Cancer Deaths Among Men Who Dip or Chew Tobacco  “The U.S. Food & Drug Administration (FDA) on January 23, 2017 published a proposed smokeless tobacco (ST) regulation that is based on erroneous calculations of ST risks.”
FDA Tobacco Director Ignores 2.5 Million “Anecdotal Reports” About E-Cigarettes  “The FDA’s refusal to acknowledge population data on e-cigarettes facilitates its effort to impose industry-killing regulations on the vapor market.  The chief federal regulator of tobacco products should acknowledge government survey data showing that e-cigarettes have helped as many as 2.5 million Americans quit smoking and/or stay smoke-free.”
We approach the new year with a renewed commitment to elevate global public discourse on the science of tobacco harm reduction.
Original author: Brad Rodu
Tweet

Regulating e-liquid flavors – could the U.S. regul...
The academic scandal hiding within the Stanton Gla...