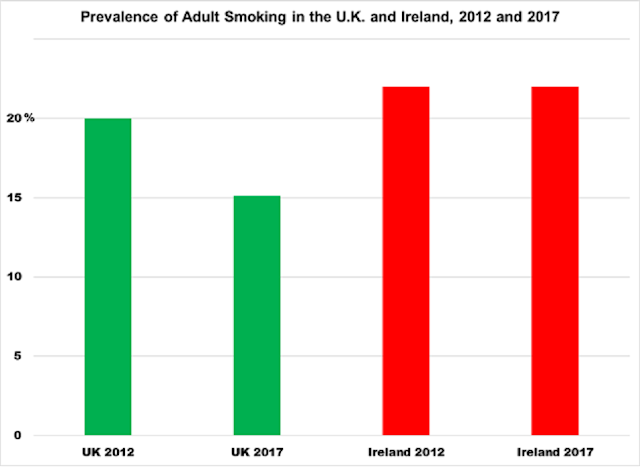 There is, as I have noted (here), a stark contrast between British government and medical authorities’ support for e-cigarettes and vaping, and the demonization of same by most of the American public health community.  A similar clash of positions exists between the United Kingdom and Republic of Ireland.

The British blogger Dick Puddlecote observes (here) that the UK and Ireland are “nearest cultural neighbours, so closely aligned [that] we that we don't even enforce passport requirements between the two countries.  The British and the Irish are about as good a comparison for ecological purposes as there can possibly be.  And, as [British Member of Parliament Sir Kevin] Barron said, the only difference between UK policy and Irish policy is that over here our government cautiously welcomes new nicotine products whereas in Ireland they don't.”

Puddlecote underscores: “In the UK smoking rates have nosedived, while in Ireland they have barely shifted.”

I have verified that statement by reviewing government data.  The UK’s Office for National Statistics reported that smoking prevalence was 20% in 2012, after stalling during the six previous years (here).  However, between 2012 and 2017, the rate fell to 15% (here).

Ireland started out in 2012 at nearly the same prevalence, 22% (here).  But five years later it was unchanged (here), according to the Ireland Department of Health.

The difference in smoking reduction in these neighboring countries is extraordinary.  As Puddlecote observes, “this deserves more attention…You just have to wonder why the tobacco control industry and other politicians, both sides of the Irish Sea, have been so silent about it.”