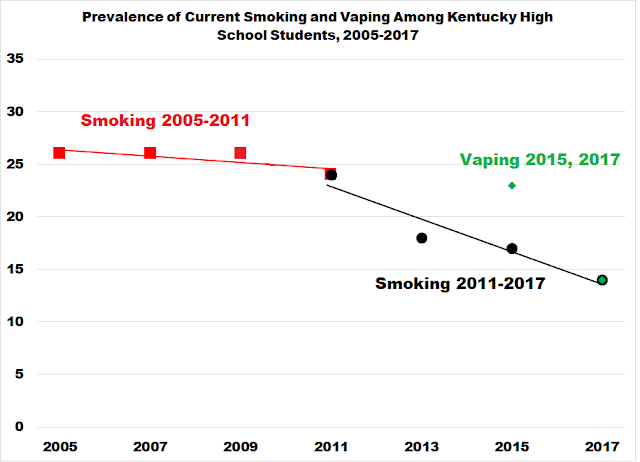 Foundation for a Healthy Kentucky (FHK) and Kentucky Youth Advocates (KYA) recently launched a campaign to discourage e-cigarette use by youth (here).  KYA executive director Dr. Terry Brooks predicted that “unless we as a commonwealth treat e-cigs as the health threat it is — in terms of now and in the future — then in 2038, Kentucky will still be the cancer capital of the nation.”  According to Ben Chandler, FHK chairman and CEO, “the fact that youth e-cig use is often a gateway to cigarette smoking makes immediate action imperative.”

Does evidence support the claim that e-cigarettes are a gateway to cigarettes? No.  Since the campaign cites the biennial Kentucky Youth Risk Behavior Survey, I have used KYRBS data to illustrate smoking and vaping among high school students in the Commonwealth from 2005 to 2017.

With the data showing show an unprecedented decline in smoking rates, there is no e-cigarette crisis among Kentucky high schoolers.

KYA asserts that they “are laser-like in our efforts to…protect kids from abuse and neglect,…help kids grow up healthy and strong…” (here)  If that’s the case, they shouldn’t ignore behaviors that are far more dangerous than vaping.  For example, 27% of Kentucky high schoolers were current drinkers, 13% were current binge drinkers, and 16% were current marijuana users.  Additionally:

Kentucky health organizations should stop obsessing about a mythical high school vaping crisis and focus instead on stopping other behaviors and activities that State data define as immediate health and safety threats.