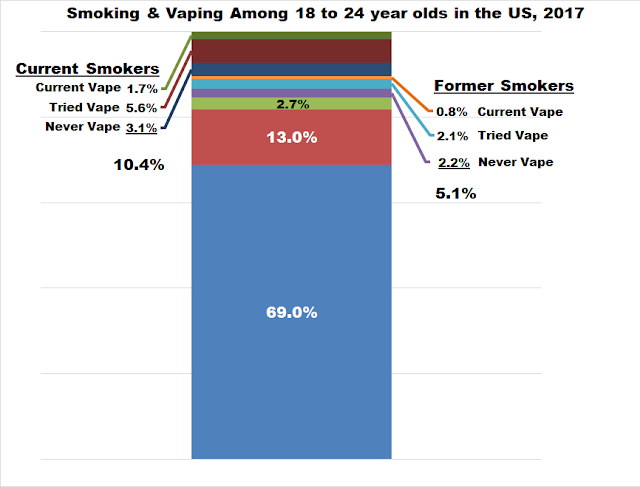 The anti-tobacco Truth Initiative tweeted that the smoking rate among young adults (18-24 year old) in the U.S. is “just 10.4%,” based on the 2017 National Health Interview Survey (NHIS) (here).
But the Initiative didn’t tell the whole tobacco “truth.”  Using the same NHIS data, I prepared the chart at left which confirms that smoking is way down among young adults, continuing a decline I reported previously (here).  Nearly 85% of young adults have never smoked, including 2.7% who currently vape, 13% who tried e-cigarettes and 69% who never used either product.
Among the 5% who are former smokers in this age group, over half were current vapers or had tried vaping products.  Even more impressive, 7 out of 10 current smokers were either current vapers or had tried e-cigarettes, meaning they could eventually make the switch to smoke-free.
Advocates of greater tobacco control make a specious boast when they celebrate lower smoking rates while ignoring the positive impact of vaping.
Original author: Brad Rodu
Tweet

All people like better products. Teenagers are peo...
Letter to WHO’s DG against prohibition and for ris...