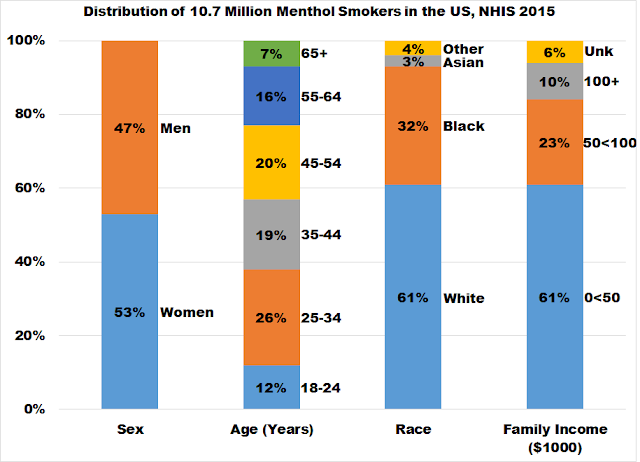 FDA Commissioner Scott Gottlieb recently said, “I’m deeply concerned about the availability of menthol-flavored cigarettes.”  He noted that menthol represents “one of the most common and pernicious routes by which kids initiate on combustible cigarettes” and “menthol products disproportionately and adversely affect underserved communities. And as a matter of public health, they exacerbate troubling disparities in health related to race and socioeconomic status that are a major concern of mine…we need to address the impact that menthol in cigarettes has on the public health.” (here)
In a similar vein, the Truth Initiative’s latest menthol screed suggests that menthol smokers are primarily teens, females, minorities and those with mental illness (here).  Is that accurate?
The answer for adults can be found in the National Health Interview Survey, the main instrument used by the CDC to track smoking in the U.S.  The NHIS collects information on menthol about every five years.  The chart at left presents the characteristics of menthol smokers in 2015, the most recent year for which NHIS data is available.
Of the 36.5 million American adult smokers, about 10.7 million reported that they smoked menthol cigarettes (22.4 million preferred plain cigarettes and the rest were uncommitted).  Women outnumbered men by a small margin, and menthol smokers were broadly distributed across the age spectrum.  Racial distribution figures stand out.  Although Black/African American smokers overwhelmingly favored menthol cigarettes, they were far outnumbered by White menthol smokers.
Sixty-one percent of menthol smokers and 55% of plain cigarette smokers were in the lowest income group.  Any difference in income distribution between menthol and plain cigarette smokers may be explained by differences in age, sex or race.  The claim that menthol use reflects a socioeconomic disparity is not valid without further investigation.
Last year I published research showing that smoking may contribute to depression, anxiety, or emotional problems (here).  But the association has nothing to do with menthol.  In the 2015 NHIS 11% of menthol smokers reported difficulty with activities because of these conditions.  The rate was the same among plain cigarette smokers.
Five years ago I noted in this blog that an “FDA preliminary evaluation – reflecting data from numerous studies – does not provide evidence of any significant differences between menthol and regular cigarettes with respect to smoking initiation, addiction to nicotine or cessation.  There is no justification for an evidence-based decision by the FDA to ban or otherwise restrict the menthol content in cigarettes.” (here)
It is not clear that a stronger scientific rationale for FDA action on e-cigarettes presently exists.  If action is taken, this blog post has described the characteristics of the 10.7 million smokers it will affect.
Original author: Brad Rodu